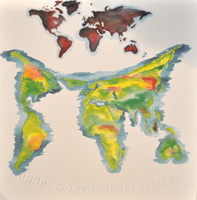 Iranian born artist Afsaneh Djabbari-Aslani attended USCs Roski School of Art and Design, at the onset of the Iranian revolution.The upheaval in her native country culminating with the US embassy hostage crisis dramatically transformed her world, with significant influence on her artistic work.
After earning her BFA and BA in French language and literature she moved to New York in 1983. After working at a NYC based gallery she decided to change direction in her career and she started working at the United Nations Development Program, in the Public Affairs Division, where she learned more about the plight of third world countries and their socio-economic issues. She also earned her Master's Degree from NYUs Robert Wagner School of Public Service. Her painting Working towards a Brighter World was published as a Holiday Card by UNDP and sent out worldwide in 1989.
In 1992 she started working for Barnard College, Columbia University as Associate Financial Aid Director and Higher Education Opportunity Program Financial Aid Director. Working with the State and Federal agencies and struggling families to further educate their children was a rewarding and eye opening experience.
With the birth of her second child, Afsaneh moved to New Canaan and became an active volunteer in the community, and a volunteer art history teacher in the public school system. This reconnected her with her passion for the arts and she started painting again in 2009.
Afsaneh says she never finds art relaxing: "It is a very active emotion for me." She is very responsive to issues in the world: choosing a self-portrait from 1982, she writes: "I had hoped that 35 years later I would look at this and put it as part of my history, where politics, religion and sexism would be resolved and I would not feel this trapped. Unfortunately, it continues with all of its trappings." 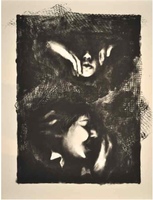 She says that as an older artist and mother of three, she has learned to channel her feelings in more positive ways. Afsaneh enjoys painting Still Life and playing with texture and color: "I don’t think of these simple objects as just a bowl or a vase but containers which hold life. We have always created containers to carry our grains and water. Bright colors, light, water, texture and reflections are an integral part of my work, tracing back to my Persian roots where color and decorative art are part of its rich history."
In the series of In My Head, she is drawing on her experience from her trip to several Islamic countries and interviewing young women from high school and universities in various towns. Afsaneh is a member of Stamford Loft Artist Association and sits on the board of  New Canaan Art Society.